Welford-on-Avon is a picturesque village set in the heart of South Warwickshire. It lies on the Avon River about four miles west of Stratford-upon-Avon, four miles south of Alcester and four miles east of Bidford-on-Avon.

The centre of the village is designated as a conservation area and contains quite a number of attractive thatched houses including what is believed to be the original “chocolate box cottage” in Boat Lane, reputedly the most photographed street in Warwickshire. The village is mainly residential, but contains a number of small businesses, the largest of which are horticultural. In total there are approximately 750 houses and about 1600 residents.

The Village has three public houses, two shops, a garage, a primary school, a bowls club, a sports club, an 18 hole Golf Course, a children’s play area, allotments and two Churches (the Parish Church of St Peter’s and the Methodist Church).

Welford-on-Avon has been County Winner or Runner Up in the Warwickshire “Best Kept Village Competition” on twelve occasions since 1991. The competition was discontinued in 2007 and as from 2008 has been replaced with a more broadly based competition.

The village boasts one of the tallest Maypoles in England and the annual Maypole dancing festival is performed by the pupils of Welford Primary School every June.

The Parish Council Meeting scheduled for this evening has been cancelled due to the prevalence of the new Covid variant.

Following the clock change signalling the onset of winter, Warwickshire Road Safety Partnership is offering road safety advice to help keep drivers safe behind the wheel and providing a timely reminder of their mature driver reviews.

The mature driver review is funded by WCC and is an hour-long bespoke session, tailored to the individuals needs with an approved driving instructor. The assessment is particularly suited to drivers 70 + with over twenty years of driving experience. 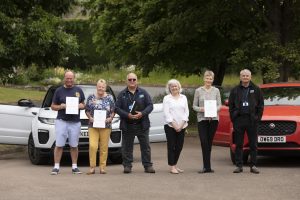